763BC: Assyrians record a solar eclipse that will be used to fix the chronology of Mesopotamian history.

1246: With the death of Duke Frederick II, the Babenberg dynasty ends in Austria.

1667: The first fully documented human blood transfusion is performed by French physician, Dr. Jean-Baptiste Denys, when a small amount of sheep’s blood is transfused into a 15-year old boy who survives. It’s unknown if he had to shave in a special way after.

1775: George Washington is appointed commander-in-chief of the Continental Army.

1864: The Battle of Petersburg begins as General Ulysses S Grant assaults the Confederate line in the American Civil War.

1878: The world’s first moving pictures caught on camera (12 cameras, each taking one picture) to see if all four of a horse’s hooves leave the ground.

1887: Carlisle D Graham survives his second ride over Niagara Falls in a barrel.

1954: Britain’s two biggest steel factories are nationalised. On the same day, EUFA is

1977: The Sex Pistols held a party on a boat as it sailed down The River Thames in London. The Pistols performed ‘Anarchy In The UK’ outside The Houses Of Parliament resulting in members from the party being arrested when the boat docked later that day. On the same day, Spain holds its first free elections since 1936.

1982: Riots break out in Argentina after Falklands/Malvinas defeat.

In the Studio 66 Schedule 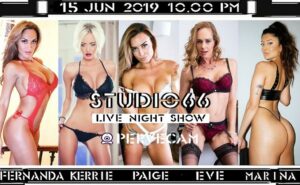